A ‘Form’ of Femininity

In Kosovo the challenging aftermath of breast surgery is faced by women on their own. Health insurances do not cover the expenses for post-surgical care. Breast prostheses are sheer unavailable all throughout the country. Supported by a group of committed women, ABC Breast Care managed to take a first step towards change.

It was back in June 2015, when ABC Breast Care specialist Barbara Buisset met Sadifete. A smart woman from Kosovo full of a zest for life, who had recently recovered from breast surgery. A supportive contact enabled Sadifete to travel to the South of Germany where she partook in a fitting for a breast prosthesis in Neubeuern, Bavaria. Here, ABC Breast Care focuses on the provision of post-surgical and long-term care for women subsequent breast surgery by offering silicone breast prostheses to be worn extracorporeal.

Sadifete’s fitting was executed by Barbara Buisset, a valuable member of ABC’s educative seminar team since 2008. “The encounter with Sadifete left quite an impression on me,” says Buisset, “not only was she dealing with the traumatic diagnosis breast cancer followed by the mastectomy of one breast, further, post-surgical care was nonexistent. It was sheer not available to her in Kosovo, neither physically nor psychologically. A shocking fact, as breast cancer goes beyond being a medical issue only. Women post-surgery face a loss of self-confidence and often feel to lack a certain form of femininity.”

ABC has prior experiences in the support of women without access to post-surgical breast care in countries such as Mexico and Colombia. A team of certified fitting specialists traveled to each country in order to provide qualified care subsequent breast surgery. In light of the above, there was no doubt for ABC Managing Director Clemens Rechenberg about the execution of Buisset’s idea to provide post-surgical care in Kosovo. “The German system fully reimburses prostheses, and state-subsidizes two specialty bras a year “, mentions Rechenberg, “it is easy to forget sometimes, that this standard can’t be applied to other parts of the world.” The Kosovo region is still facing the effects of the Kosovo War from 1998/99. The women bear the full cost of breast care post-surgery. Only option is a trip to neighboring country Macedonia – an undertaking that is financially impossible for most women in Kosovo. “Our desire as a company would be to facilitate access and enable these women to have a fresh start.”, concludes Rechenberg.

Assisted by Sadifete, ABC employees formed a team of Kosovar breast care specialists: Ditra Lumi, Sadifete’s sister and clinician in the Prishtina Hospital who facilitated a room on the premises. Rina, daughter of Drita Lumi, who shared the task of overall organization together with Barbara Buisset. Nafjije, a retired journalist and breast cancer survivor, who used the strings of her breast cancer support group Jeta Vita to reach as many women in Kosovo, and who furthermore informed the local media. 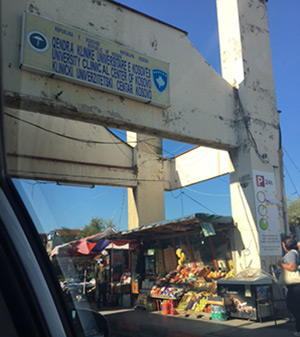 A few obstacles had yet to be overcome on the way to the successful execution of the event. Countless phone calls, emails and documental correspondences seemed still not enough to fulfill the bureaucratic requirements, and appeared to threaten the project’s realization. “We were close to giving up”, reveals Buisset, “the amount of work simply exceeded our capacities. Yet, our team of women in Kosovo would not cease fighting their fight, and remained hope through it all. This served as the right motivation for us on the other side of things.” Come September, Barbara Buisset, team member Brigitte Stickling, and breast cancer survivor and ambassador Rosi Stehböck finally find themselves in an airplane to Prishtina. Despite detailed preparation in advance, the Kosovo endeavor remained a leap in the dark. 80 breast survivors in need of breast care had been invited.

Right after landing the team is welcomed by good news: The morning program of Kosovar television station rtv21 invited for an interview taking part at once. Finally arriving at the hospital premises facilitating the breast care fitting, Buisset and Stickling are already awaited by around 40 women. And the number kept growing.  “Our overall time estimate calculated with one hour per fitting roughly – there was no doubt we had to throw our initial planning overboard.” remembers Barbara Buisset.

Ball and Fabric as Substitute for Prosthesis

45 women received a well fitted breast prosthesis and specialty bra and many others were asked to return the next day. Around noon the following day, certain bra and prostheses sizes became unavailable. The crew fired through, no time to be wasted. Many women were still waiting for treatment. The expression of gratitude forwarded by every single one of them was motivation enough to keep the team going. There was hugging, tears of joy, blessings and an immense pride over the fact to own a first set of nice female lingerie. “The women had filled the insides of their empty bra pockets with scarfs, balls or cotton wool. Many arrived with dirty, worn out bras or completely without any.” Buisset reports.

The response to the project was more than impressive. The stream of women seeking breast care continued to flow in, and more television stations asked for an interview. On day three the team was visited by Doana, person in charge of education for the company Roche and active in the area of health literacy in Kosovo. Enthusiastic and curious about the project she offered to make contact with key stakeholders of the qualified medical supply chain in the country. This set a first milestone in the striving to create access to breast prostheses to women all over the Kosovo region. The shared mission of increasing awareness around the topic breast cancer formed a strong bond between all eight team members. Lively debates and brainstorming sessions were held to find solutions for an improvement of the situation. “The energy and dedication of these Kosovar ladies was very impressive.”, states Buisset, “every single one of them was hungry for change and didn’t shy participation to create the change.” 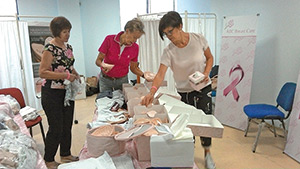 Rosi, Barbara and Brigitte in the Fitting Room

After three eventful days in Prishtina and around 125 women successfully partaking a breast care fitting, the three ABC team members made their way back home to Germany. Carrying along a sentiment of meaningfulness of their work, many new impressions and ideas, and a long list of women who could not be provided with a well fitted prosthesis. The missing prostheses were shipped time promptly and the ABC team is to return to Kosovo in December 2017.

Buisset and Stickling hope this article will raise awareness and reach out to even more support groups and other parties engaged in the topic of breast cancer: “Our team strongly believes that this project helped to bridge the gap between people in Kosovo and Germany. If it manages to long-term improve the situation of breast cancer survivors in the Balkan States – well, that would make for one good Christmas present.”